Our first draft of the map was not to scale. However, we soon revised that to make it more clear what we were trying to convey, that is, how long it takes to walk between buildings on Campus. 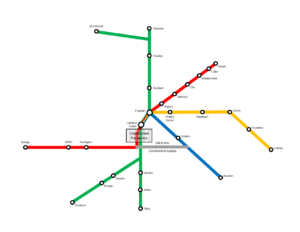 Our second draft was to scale (as best as possible). 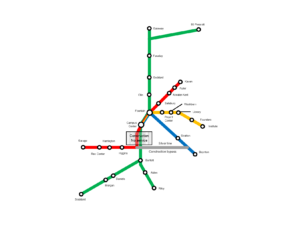 Some feedback that we got from the class was:

Most importantly, however, we realized that the purpose that we intended, to show students how long it would take to get from the Campus Center to another point on campus, was not immediately clear. This is definitely something we need to work on, since our purpose must bend to the limitations of the subway style, even if we were to take many liberties and depart more from the style. Essentially, the important feedback we got was to make our purpose as clear as possible. Because of the subway style, it was necessary to narrow down the map to represent just trips from the campus center. If you were to originate at a different location, you wouldn’t necessarily go on the same path as depicted in the map. Making this clearer is definitely the next step, but something I think will be quite difficult because of the conditional rhetoric of subway maps – people are used to being able to go from any point to another. One possible way to solve this is to simply have the map not be distributed to students and instead be hung on the wall of the Campus Center. This solves the problem of where people start, as well as making the text even larger and easier to read from a distance.

In order to address the problems mentioned above from the feedback session, we spent quite some time after class and made another draft that includes the WPI logo and the text, “Walkability Map; and the impact of construction on commute times” to hopefully narrow down that the map is in fact a depiction of WPI and that we intend for it to be used to determine walking times. We didn’t make the text much larger, but instead we emphasized the ending lines to make it more similar to the MBTA map. We also rearranged quite a bit of the lines to make everything cleaner and evenly spaced. Although, there are still some elements especially towards the core of the map that simply cannot be put into the proper scale, such as the construction area, the distance between Higgins and the Rec. Center, and the distance between the Campus Center and the fountain. Regardless, it is in much better shape than the previous draft.